However, Xpeng shares jumped 45% in the United States as the company signaled it could see a bottom to falling deliveries. 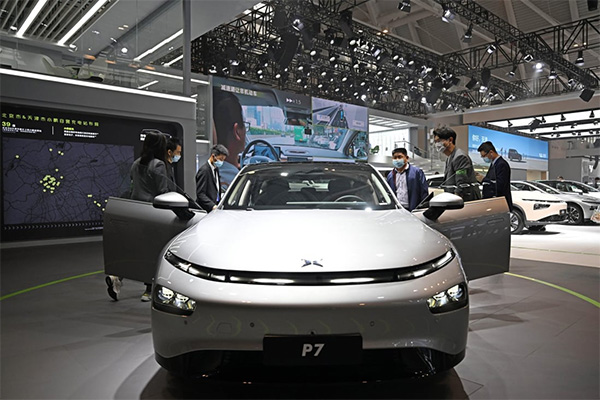 Here’s how it did in the third quarter of 2022, compared with Refinitiv consensus estimates:

Net loss: 2.38 billion Chinese yuan versus 2.09 billion yuan expected. That was wider than the 1.59 billion net loss posted in the same period last year, but narrower than the second quarter.

XPeng delivered 29,570 electric vehicles in the third quarter, 15% more than the same period last year. However, that was a 14% decrease from the second quarter of the year.

In October, XPeng delivered 5,101 vehicles, a sharp drop from the 8,468 cars delivered in September. Brian Gu, president of XPeng, told CNBC in an interview on Wednesday that November deliveries would be under 6,000 units but the company is expecting them to bounce back to 10,000 in December.

Bill Russo, CEO of Shanghai-based Automobility, said the share price pop is “probably because the markets have punished them [Xpeng] and that this somehow puts the bad news in the rear view mirror and represents the bottom.”

The Guangzhou-headquartered firm has faced several challenges in recent months, including widespread Covid lockdowns in China as the country battles outbreaks in various cities. Like other carmakers, XPeng has been dealing with rising material costs, which forced the company to hike the price of its cars earlier this year.

Meanwhile, XPeng has faced rising competition from the likes of BYD and Tesla.

Gu said the outlook is based on a number of factors. Firstly, he said that the G9 SUV, which was launched in September, faced key component shortages and so the company couldn’t ramp up production as they’d hoped and had to delay deliveries to customers.

The XPeng executive also said the company is operating with “severe” constraints, referring to Covid lockdowns across China.

Gu said XPeng is also going through a “new product replacement cycle so some of the older product that has not been upgraded or modified in over a year is facing pressure” so there is a slowdown in older products being sold.

XPeng shares have been hammered this year and are down 85% as investors turned away from Chinese growth stocks amid a slowdown in the economy and rising interest rates around the world.

A number of analysts have cut their target share price for the company. This week, Jefferies cut its target price on XPeng’s stock from $18.6 to $4.20.

The investment house said in a note published Monday that XPeng made “missteps in product and pricing strategy leading to market share losses on existing models and weak reception of its new flagship G9 SUV.”

The price of XPeng’s flagship car, the P7 sedan, is higher than some of its competitors, Jefferies said, while Tesla’s Model 3 is priced competitively.

While XPeng has been raising the price of its cars, some of its competitors had been cutting prices.

“The competition’s products like BYD and Tesla have been lowering prices so we actually did face more competitive pressure,” Xpeng’s Gu said, adding that the company was perhaps “too confident” about its pricing strategy.

He said the company would take pricing into consideration when it releases three new models in 2023. But he said the company is unlikely to cut the current price of any of its existing models such as the P7 and P5 sedans. Instead, XPeng will offer “incentives” to customers to buy cars in a bid to regain some lost market share, Gu said.